In a city full of haters

The year was 2011; as a local nightlife photographer, I spent most of my twenties working around bars in El Paso, mingling with people of all races and social strata.

Those interactions allowed me to get to know and relate with many different opinions, ways of living, and beliefs.

One day the show some love (in a city full of haters) project came to me while looking into posts of different social media networks and conversations about haters and what that entails. Which according to the Urban dictionary is:

"A person that simply cannot be happy for another person's success. So rather than be happy, they make a point of exposing a flaw in that person. Hating, the result of being a hater, is not exactly jealousy. The hater doesn't really want to be the person he or she hates. Instead, the hater wants to knock someone down a notch."

The project took a life of its own, and before I knew what hit me, I had people lining up posing with their hands together, making a heart, and showing some love when it was needed most.

The unity the project created turned into a clothing line that allowed people to continue to show some love without a camera present while creating the unity of wearing the same symbol on our chests regardless of our beliefs, social status, or race. No matter what we believe in, we can always show some love to one another.

The shirt line became a success, and it allowed me to collaborate with many talented local artists who printed the shirts and added a special touch to each of the five models released from 2011-2013.

The shirts and logo's original design came from the talented local designer's creative mind, now residing in Arizona, Alex Lopez. He was always able to make sense of my ideas and make them into something tangible people could wear. I was able to work with Diego "Robot" Martinez and Silvestre Rodriguez from Estylow Junktion.

As 2021 started, I kept seeing division in a world ravaged by a global pandemic and differences of opinions. The time felt right to once again hopefully bring some much need unity and show some love together.

The new line designed by Lopez hopes to revive those feeling, which started almost ten years ago.

Hopefully, you will like the design and support the project. 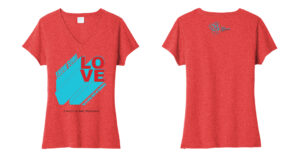